The two positions are not interchangeable—and misperceptions of their roles can hurt teams and compromise productivity.

It’s important to understand the differences between a data engineer and a data scientist. Misunderstanding or not knowing these differences are making teams fail or underperform with big data.

A key misunderstanding is the strengths and weaknesses of each position. I think some of these misconceptions come from the diagrams that are used to describe data scientists and data engineers. 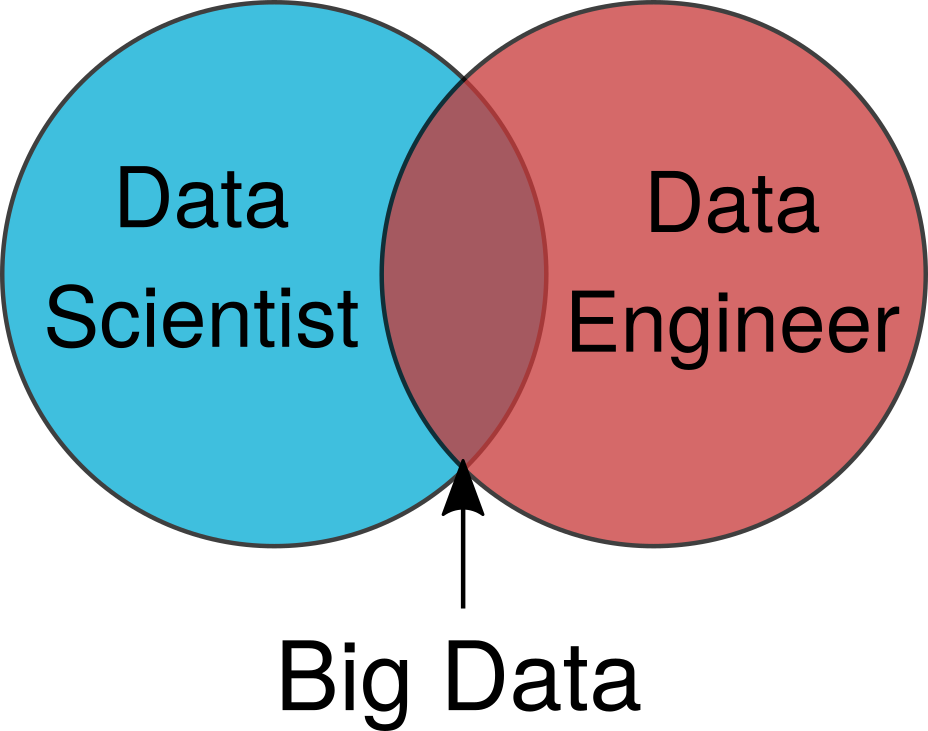 Venn diagrams like Figure 1 oversimplify the complex positions and how they’re different. It makes the two positions seem interchangeable. Yes, both positions work on big data. However, what each position does to create value or data pipelines with big data is very different. This difference comes from the base skills of each position.

What are data scientists and data engineers?

When I work with organizations on their team structures, I don’t use a Venn diagram to illustrate the relationship between a data engineer and a data scientist. I draw the diagram as shown in Figure 2. 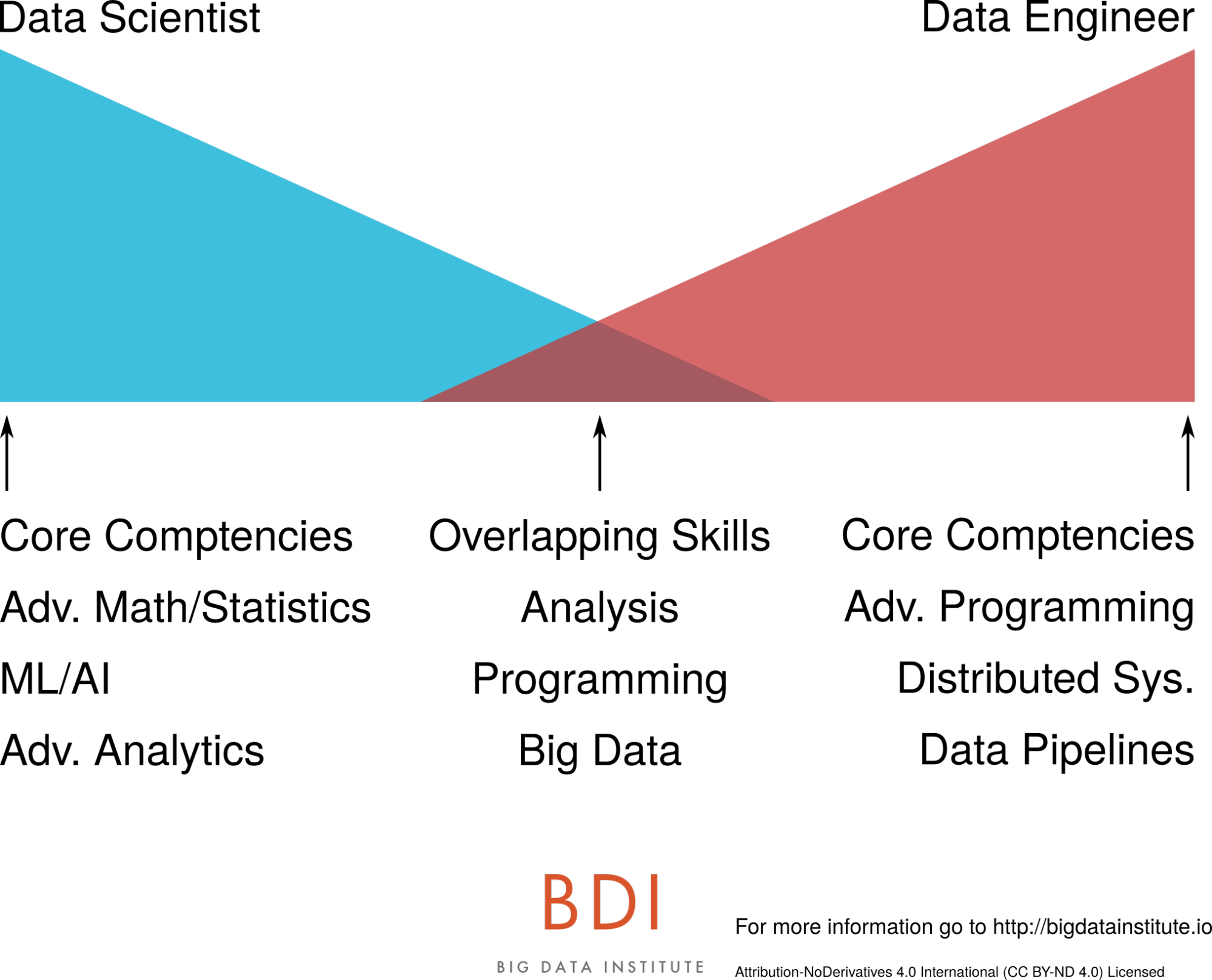 Figure 2. Diagram showing the core competencies of data scientists and data engineers and their overlapping skills. Illustration by Jesse Anderson and the Big Data Institute.

At their core, data scientists have a math and statistics background (sometimes physics). Out of this math background, they’re creating advanced analytics. On the extreme end of this applied math, they’re creating machine learning models and artificial intelligence.

Just like their software engineering counterparts, data scientists will have to interact with the business side. This includes understanding the domain enough to make insights. Data scientists are often tasked with analyzing data to help the business, and this requires a level of business acumen. Finally, their results need to be given to the business in an understandable fashion. This requires the ability verbally and visually communicate complex results and observations in a way that the business can understand and act on them.

A common data scientist trait is that they’ve picked up programming out of necessity to accomplish what they couldn’t do otherwise. When I talk to data scientists, this is a common thing they tell me. In order to accomplish a more complicated analysis or because of an otherwise insurmountable problem, they learned how to program. Their programming and system creation skills aren’t the levels that you’d see from a programmer or data engineer—nor should they be.

At their core, data engineers have a programming background. This background is generally in Java, Scala, or Python. They have an emphasis or specialization in distributed systems and big data. A data engineer has advanced programming and system creation skills.

In my experience, a data engineer is only tangentially involved in the operations of the cluster (in contrast to what’s said about data engineers here). Though some data science technologies really require a DevOps or DataOps set up, the majority of technologies don’t. Just like with most programers, I wouldn’t allow them direct access to the production system. That’s primarily the job for system administrators or DevOps.

There is an overlap between a data scientist and a data engineer. However, the overlap happens at the ragged edges of each one’s abilities.

You’ll notice that there is another overlap between a data scientist and a data engineer—that of big data. Understanding each positions’ skills better, you can now understand the overlap. Data engineers use their programming and systems creation skills to create big data pipelines. Data scientists use their more limited programming skills and apply their advanced math skills to create advanced data products using those existing data pipelines. This difference between creating and using lies at the core of a team’s failure or underperforming with big data. A team that expects their data scientists to create the data pipelines will be woefully disappointed.

When organizations get it wrong

A recent example of this was a data scientist using Apache Spark to process a data set in the 10s of GB. Yes, Spark can process that amount of data. However, a small data program would have been much, much faster and better. Their Spark job was taking 10-15 minutes to execute, but the small data RDBMS took 0.01 seconds to accomplish the same thing. In this case, the data scientist solved the problem after a fashion, but didn’t understand what the right tool for the job was. Times that 15 minutes spent running that job by 16 times in a day (that’s on the low end for analysis), and your data scientist is spending four hours a day waiting because they’re using the wrong tool for the job.

I talk more about how data engineering and data science teams should interact with each other in my book Data Engineering Teams.

A far less common case is when a data engineer starts doing data science. There is an upward push as data engineers start to improve their math and statistics skills. This upward push is becoming more common as data science becomes more standardized. It’s leading to a brand new type of engineer.

The need for machine learning engineers

Let’s face it—data scientists come from academic backgrounds. They usually have a Ph.D. or master’s degree. The issue is that they’d rather write a paper on a problem than get something into production. Other times, their programming abilities only extend to creating something in R. Putting something written in R into production is an issue unto itself. They don’t think in terms of creating systems, like an engineer.

The general issue with data scientists is that they’re not engineers who put things into production, create data pipelines, and expose those AI/ML results.

To deal with the disparity between an academic mindset and the need to put something in production, we’re seeing a new type of engineer. Right now, this engineer is mostly seen in the U.S. Their title is machine learning engineer.

Figure 3. Diagram showing where a machine learning engineer fits with a data scientist and data engineer. Illustration by Jesse Anderson and the Big Data Institute.

As you looked at Figure 2, you probably wondered what happens to the gap between data science and data engineering. This exactly where the machine learning engineer fits in, as shown in Figure 3. They’re the conduit between the data pipeline a data engineer creates and what the data scientist creates. A machine learning engineer is responsible for taking what a data scientist finds or creates and making it production worthy (it’s worth noting that most of what a data scientist creates isn’t production worthy and is mostly hacked together enough to work).

A model running in production requires care and feeding that software doesn’t. A machine learning model can go stale and start giving out incorrect or distorted results. This could be from the nature of the data changing, new data, or a malicious attack. Either way, the machine learning engineer is on the lookout for changes in their model that would require retraining or tweaking.

As I much as I razz the data scientists for being academics, data engineers aren’t the right people, either. An engineer loves trues and falses, the black and white, and the ones and zeros of the the world. They don’t like uncertainty. With machine learning, there is a level of uncertainty of the model’s guess (engineers don’t like guessing, either). Unlike most engineers, a machine learning engineer can straddle the certainty of data engineering and the uncertainty of data science.

The bar for doing data science is gradually decreasing. The best practices are gradually being fleshed out. The most common algorithms are known. Even better, someone has already coded and optimized these algorithms.

This increasing maturity is making it easier for both data scientists and machine learning engineers to put things in production without having to code them. We’re also seeing data science become a more automatic and automated process. Google’s AutoML is one such trend where it will find the best algorithm for you automatically and give results without requiring the work of a full-fledged data scientist. DataRobot is another technology that is automating the process of finding the right data science algorithm for the data. It will also aid the machine learning engineers in putting that algorithm into production.

The key to the productivity of machine learning engineers and data scientists will be their tools. There’s a lack of maturity now, and that’s why I’m wondering how productive they’ll be in the future.

These changes took the data science team from 20-30% productivity to 90%. The teams were able to do more with the same number of people. The data scientists were happier because they weren’t doing data engineering. Management could start delivering value against the promises of big data.

Finally, most problems with big data are people and team issues. They are not technical issues (at least not initially). Technology usually gets blamed because it’s far easier to blame technology than to look inward at the team itself. Until you solve your personnel issues, you won’t hit the really tough technical issues or create the value with big data you set out to create. Take an honest look at your team and your organization to see where you need to change.